A Vets for Climate Action webinar

Our guest speaker, Dr Terry McCosker has been part of Australian Agriculture for over 50 years. An entrepreneur, innovator, educator and farmer. He has spent decades trying to influence the relationship that pastoralists have with soil.

In this webinar Dr Gundula Rhoades will be interviewing Dr McCosker, covering the connection of farming, cattle, soil and climate change and the solutions that farming offers to climate change.

Bonus Content: With your knew found understanding of the relationship between agriculture and carbon, we hope you will be inspired to take this conversation to your candidates for the upcoming election. We have a brand new toolkit to help you through every step of this process so we wanted to take some time during this webinar to show you some of the highlights of our Election Toolkit.

The content presented in this webinar is for anyone wanting a better understanding of soil and carbon. Either to aid in your agriculture management, or to be able to speak with more understanding when presenting to candidates, colleagues or friends.

There are no limits on attendees and we encourage as many people as possible to join live to take part in this unique event.

This webinar will be recorded and shared after the event so anyone who is unable to attend can watch at a time convenient to them.

Terry McCosker is one of the great innovators of Australian agriculture who has had an inordinate impact on agricultural practices over many years. On this basis the Central Queensland University conferred on Terry, the degree of Honorary Doctor of Agribusiness, in March 2015 and he was awarded an OAM in the 2021 Queens Birthday honours list for his contribution to agriculture. Terry is a Churchill Fellow, a Fellow of the Tropical Grasslands Society, has chaired the Australian Beef Expo, and sat on numerous advisory committees.

One of his greatest lifetime achievements has been to effectively bridge the gap between the contesting paradigms of traditional agriculture and regenerative agriculture, helping to ensure the long-term survival of Australian agriculture and its farming families.

Terry is an internationally acclaimed teacher and has worked in research, extension and property management in both government and private sectors for almost 55 years. In his research era, Terry published over 40 papers and made several world first discoveries in the 1980’s.

Terry co-founded RCS in 1985 which has set the benchmark for capacity building in rural and regional Australia and has been independently rated (by a Commonwealth Govt survey) as the most trusted source of farming knowledge in Australia.

Terry is also a pioneer in the field of soil carbon and carbon farming, having been committed to research and commercial activity in this area since the early 2000’s. He founded Carbon Link in 2007 and remains the Chairman of this agricultural carbon aggregator. Carbon Link was awarded a Commonwealth Commercialization grant of almost $1m in 2016 and was the most innovative business in the region in 2016. It has baselined 16,000ha. 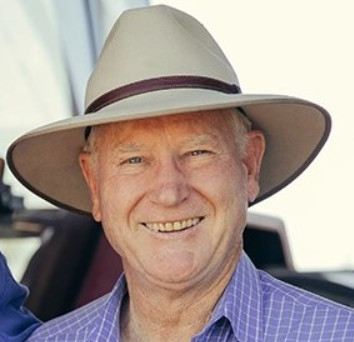 Terry was described in the Australian Farm Journal editorial in July 2010 as follows: “It is hard to imagine the mental toughness and commitment McCosker and his early farmer adopters had to muster to withstand the flood of criticism from within conventional agricultural science circles. … McCosker’s ideas took farming out of a war with nature to an
association with it. He introduced Australian farmers to the concept of ecosystem health and developed methods of measuring it alongside financial health. Critically he introduced the concept of farm family well-being and welcomed
female partners, siblings and parents into courses about decision making.”