Vets for Climate Action was a signatory to a joint statement signed by civil society in pursuit of a safe climate. This was supported by a series of full-page advertisements within The Australian, The Daily Telegraph, The Herald Sun and The Australian Financial Review on 12-Aug-2021.

This work was part of a push from our organisation to bring attention to the IPCC report on climate. 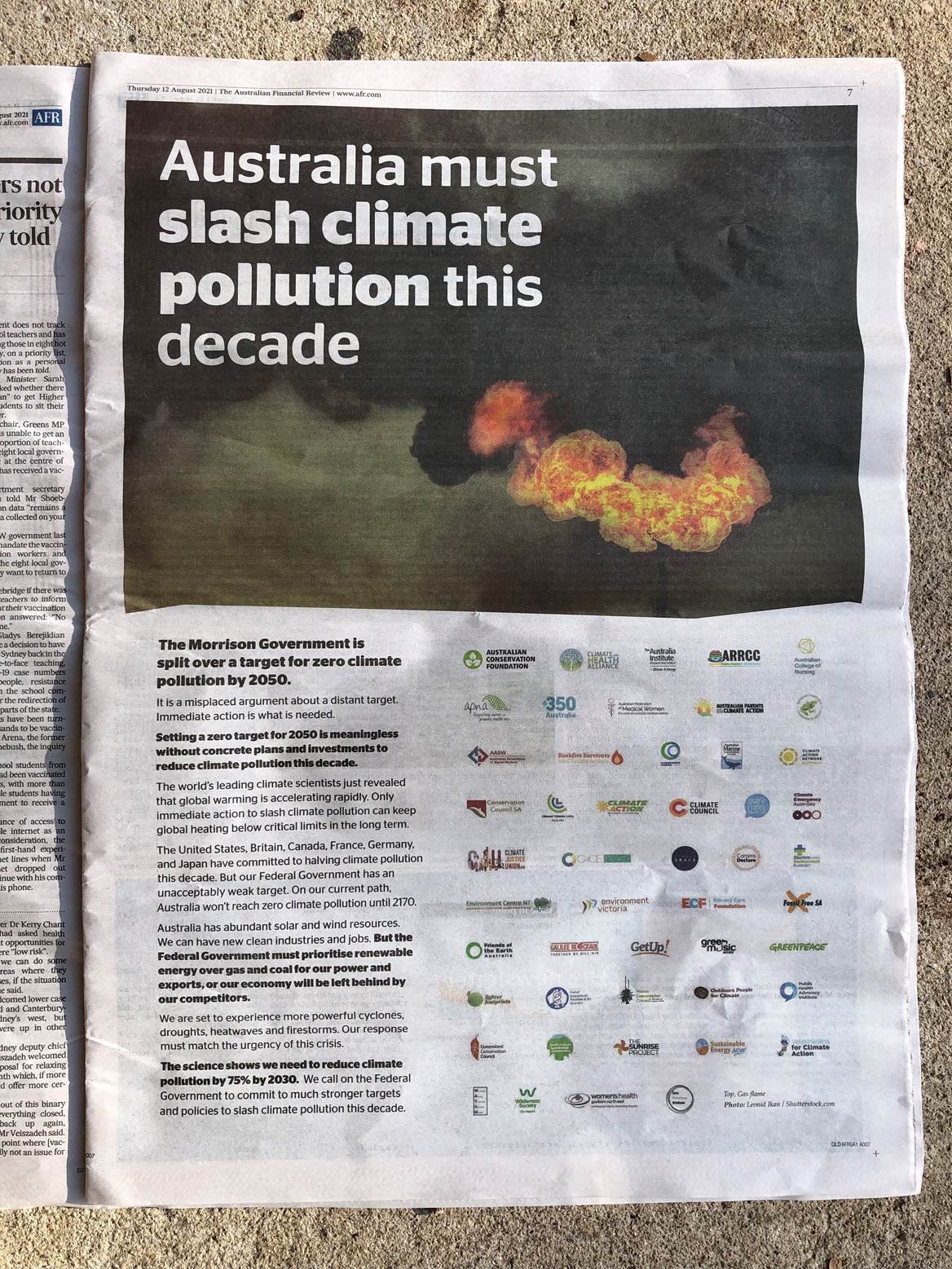 The full joint statement is as follows:

Moving on from a loud argument about a distant target

The political debate about climate change in Australia is stuck on whether the Federal Government should commit to net zero climate pollution by 2050.  This is largely irrelevant to the real world climate crisis that’s harming Australians now, and endangering many of our livelihoods. The scientific consensus is that a rapid reduction in climate pollution is required by 2030 to avoid even more climate damage and keep the global 1.5 degree goal within reach.

Australia needs greater, immediate climate action to protect our communities, economies, jobs, and nature. Setting a net zero emissions target for 2050 is not only too late, it is also meaningless without a plan or concrete steps or investments that cut emissions this decade.

Australia is out of step with the rest of the world. Globally, our strategic allies and trading partners are committing to significant pollution reduction targets for 2030. At a summit of the Group of Seven (G7) country leaders in June this year, the United States, United Kingdom, Canada, France, Germany, Italy and Japan all committed to halving carbon emissions this decade. Australia set a weak emissions reduction target of 26-28% below 2005 levels by 2030 six years ago, and has been refusing to increase this.

Australia has exceptional natural advantages with its abundant renewable energy and skilled workforce.  We can develop world-leading new industries and jobs based on our vast reserves of solar and wind energy, but if development plans and investment don’t materialise, these renewable industries and jobs will go to other countries. Our exporters and workforce will also become disadvantaged as they wear the cost of border carbon adjustments applied to countries that are not acting responsibly to reduce climate pollution.

Unless the Federal Government acts decisively we will be left behind, or worse, penalised and globally isolated for our inaction.

There is no “safe” level of global warming. Already, at a global average temperature rise of 1.2°C, we’re experiencing more powerful storms, destructive marine and land heatwaves, and a new age of megafires. The latest science, and extreme floods, fires and heatwaves being experienced here and around the world, tell us climate change is accelerating. Our response must match the scale and urgency of this worsening crisis.

In November all countries will come together at the United Nations climate talks in Glasgow to accelerate climate action and avoid the most catastrophic social, economic and environmental consequences of global warming. Our long term allies, the United Kingdom and the USA, and some of our largest trading partners, Japan and South Korea, want the Australian government to commit to much stronger targets for the coming decade.

The Federal Coalition Government is split over a long term target for 2050; having a public squabble between Barnaby Joyce and some Queensland National Party MPs, who continually question climate science, and many Liberal MPs who want the government to act.  This debate is a loud argument about a distant target, when it should be about immediate action.

The Australian Federal Government does need to commit to a net zero target, but most importantly all Australian federal political parties should be pursuing a science-based target of 75% pollution reduction by 2030, with a just and fair national plan to rapidly slash climate pollution across our economy this decade.